In January, I did my first visibility event as an activist with Delta AFA. I’m committed to helping lock in our union this year, but my Delta AFA story started during training.

I don’t eat bread, so I was the only person in my class who didn’t attend the “pizza party.”

I remember classmates talking about it afterward. They told how the company reps explained that what made Delta "special" was that we didn’t have a union coming between us, so we were all one family.

That upset me. There was no union rep to offer another perspective, just Delta imposing a one-sided view. We deserve to be informed correctly—and to hear more than just the company’s side of the story.

I love my job, but if we’re a family, Delta is a controlling parent and we’re kids with no say. That’s not the kind of relationship I want to have at work.

That imbalance shows up all the time. A few weeks ago, I was doing visibility in Seattle, and an LA Flight Attendant on a sit stopped by. After a little conversation, she said, “All I’ve heard is how a union could benefit one certain person, but not our work group.”

Earlier in the conversation, she had mentioned stress when we were facing potential furloughs early in the pandemic. I said, “With a union, we’d have clear rules and a seat at the table, instead of having to refresh our emails or see if someone had leaked the details on Facebook.”

She nodded. “You’re right, that was so stressful. We weren’t in the loop, we were just working in the dark.” Before she left for boarding, she signed a card.

We need to have clear rules that are applied fairly to everyone. Join us now. Sign a card, and sign up to help us secure our Flight Attendant union and an industry-leading contract at Delta.

If you see me on the line, come and say hi! I’m super excited to continue organizing and feel really hopeful about this next year and what we’re going to accomplish. 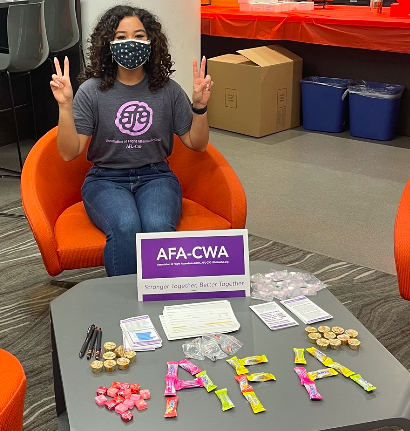