Health and safety in the workplace is often the driving issue for organizing union representation. That's because no paycheck matters if you don't have your life or your health. Especially in times of COVID, this is the top of mind.

We heard from Delta Flight Attendants across the system as Delta publicly lobbied the CDC for a change to isolation time, got immediate action from CDC in the middle of the holidays, and communicated the new policy at Delta in record speed. Admittedly, as we noted the policy did not meet even the new low standard of the CDC guidance by failing to include reference to returning to work after five days only if no longer experiencing symptoms - Delta did update the policy numerous times to address this and other issues. Some questions still remain from Flight Attendants and we will encourage Delta to answer these questions too.

The statements Delta made in public did not reference public health, but rather greater flexibility to schedule crews in the midst of staffing shortages. Flight Attendants reported a wide range of response from management on the ground following the policy change, in some cases supportive and in other cases not supportive of workers who are sick or exposed to the virus. With a union contract we make sure there's not this kind of unequal treatment and that the contract and company policies are applied equally to all.

If Delta had a legal collective bargaining relationship with Delta Flight Attendants we would have a process to address any policy change related to safety and even work with the airline like we have done at other carriers to negotiate programs that provide incentives for those who are not sick to pick up extra time. We have been very clear with the industry and the CDC: no worker should be coerced or forced to come to work sick. That's not good for individual workers or the crew and passengers they might expose, nor is it good for longterm staffing and public confidence in air travel. Safety comes first.

Delta would do far better to respect the rights of Flight Attendants to freely choose union representation, rather than spending time and money fighting the rights of Delta employees. Last Friday night Delta legal chose the latter and sent an unsubstantiated cease and desist letter to AFA. There's no merit to this letter, but as you'll read in our response, it is perhaps the first indication that Delta would prefer to meet with AFA on issues you are raising rather than have those issues play out in public. If this is the case, we welcome it! 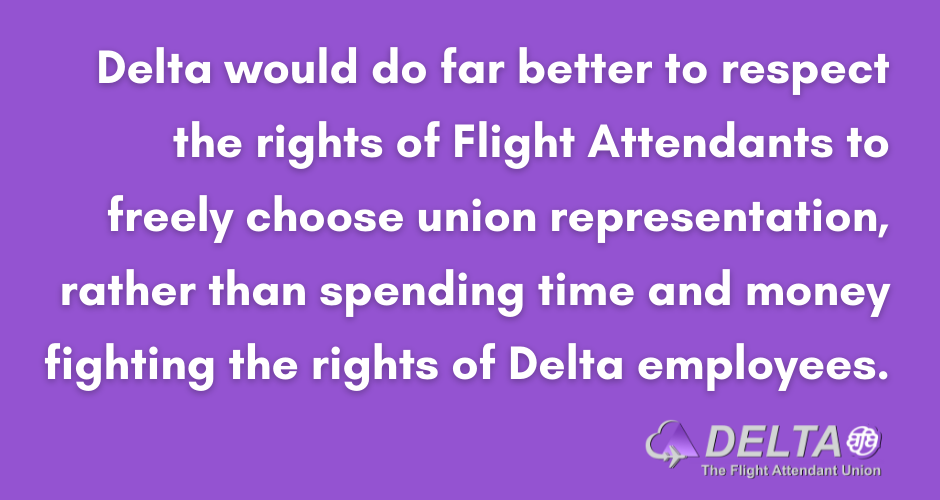 Our organizing is all about getting to contract bargaining and locking in protections in pay, benefits, and work rules - including how assignments work when there's major operational disruptions. But we've also always said this organizing drive is about making Delta a better place to work even as we work to achieve an election for those legal collective bargaining rights. If Delta management is suggesting we begin that process now and is changing its position to now respect your rights to organize it would be a fantastic new day at Delta that would be cheered overwhelmingly by a public which is overwhelmingly supportive of unions.

Either way, we're going to keep organizing to make sure Delta Flight Attendants have the legal right to collective bargaining and the ability to lock in your contract. Ed Bastian has a contract, and he'd never work without one. Flight Attendants should have the same respect and clarity of working conditions too.

Stay safe and keep supporting each other. Sign your card, update your card, and join our campaign today. We're with you all the way.

Read the letter or view the PDF:

By letter dated January 7, 2022, Delta’s Chief Legal Officer, Peter Carter, contacted AFA’s former (now retired) General Counsel, Ed Gilmartin. The letter was forwarded to me and I thought it best to reply directly to you.

Mr. Carter’s letter makes general claims about allegedly false and defamatory statements made by AFA in connection with the COVID-19 pandemic and Delta’s policies for employees with COVID. His letter does not, however, quote a single statement or social media post that is false in any way, much less defamatory. We believe our statements are truthful and accurate. But we will, of course, correct the record if you can point out to us any specific instance where our statements were false when we made them.

We’re glad that AFA’s calling attention to the issues appears to have led Delta to update its policy several times and communicate this to workers. Delta’s policy now refers to being asymptomatic before returning to work, which was a serious concern as that CDC guidance was initially omitted from Delta’s policy announcement. But we are still getting questions from Delta flight attendants about returning to work with a low grade fever and about the fact that Delta’s current policy only recommends to test before returning to work and does not require a test. We are also hearing concerns about prompt notification to crew of exposure, the lack of availability of tests ordered from the company, confusion about the process to get guaranteed pay, if any, for trips lost during the period of isolation beyond five days, and the enforcement and type of masking for anyone COVID+ who has not tested negative before returning to work, including in locations that are currently mask-exempt for Delta workers interfacing with Flight Attendants.

Mr. Carter’s letter explains Delta’s current policy in glowing terms, but it does not address the perception that Delta itself created for the public and the employees. Delta’s only public statement about implementing the new rules it openly lobbied CDC to change in the middle of the holiday travel meltdown at Delta was clear. On the Delta Hub site a December 27 article about implementing the new CDC isolation guidance and in statements made to the media, Delta wrote, “The updated guidance allows more flexibility for Delta to schedule crews and employees to support a busy holiday travel season and a sustained return to travel by customers.” Delta’s public statement, which was widely reported, said nothing about science, public health, or the safety of the staff; it’s sole focus was on staffing and scheduling.

Delta lags behind other major airlines in unionization by over 50% of the entire workforce, but one union on the Delta property also has expressed concern that the airline’s new guidance would violate the union contract. When issues arise with respect to the legally binding contract vis-a-vis changes to company policy there is a process to resolve them with the union. Issues or disputes are often resolved out of public view because there is a legal collective bargaining relationship. The parties meet, identify issues, and most often resolve disputes or make policies better and more clear to the benefit of employees and the company. That’s why you’ll often hear airline competitors talk about the advantage of working with their unions. Over the past two years that advantage was $54 billion in PSP funds, of which Delta took $12 billion, that made it possible to survive a crisis worse than all prior disasters in the history of aviation combined.

AFA has worked with airlines across the industry throughout the pandemic. Together we built bipartisan support to make sure our industry didn't collapse, to save jobs, and to have the ability to implement necessary safety measures that also built consumer confidence in air travel during the pandemic. We worked together to implement mask mandates and communicate other safety and health measures, as well as promote access to the vaccine in order to protect workers and make way for the “real sustained return to travel.” I understand that you don’t have first-hand knowledge of these collective efforts because you didn’t attend any of the joint working sessions, take part in the White House meeting in September 2020, or accept the request to testify before the Senate hearing in December 2021. But I do believe the evidence of valuing union representation for Delta employees is enormous. If Delta valued working with the unions like its competitors, I would have expected Delta to make a different calculation in March of 2020. Rather than focus like the rest of the industry on funds for our collective survival, Delta alone paid lobbyists to ensure there would be no requirement in the CARES Act prohibiting the use of those taxpayer funds to interfere with the right of your employees’ to freely choose a union. That condition, in earlier drafts of the funding bill, would have simply required you to adhere to the existing law (Railway Labor Act). The results of respecting workers and their right to unionize speak for themselves in our industry.

I appreciate that Mr. Carter’s letter references AFA reaching out to Delta with concerns prior to taking them to the public. If this is an invitation, we welcome it. We have sent numerous letters over the past several years identifying major issues we could discuss and resolve for the benefit of the Flight Attendants and the company. With the exception of legal responses acknowledging employee legal rights to wear union pins and discuss union issues in non-work areas, we have not received responses to our efforts to engage on resolving issues in the workplace. But if Mr. Carter is signaling a change of heart at Delta, we look forward to meeting to discuss issues and resolve them. This new COVID isolation policy and remaining questions about it is a good opportunity. Delta and our union have been on the same side of many issues, from enforcing Open Skies Agreements for fair competition, to stopping fraudulent attempts to bring untrained animals of all kinds to wreak havoc on passengers and crews in our cabins, to ensuring implementation of 5G is not at the expense of aviation safety. Certainly, we can agree aviation safety and health in the time of COVID is our top priority. No one should come to work sick. Together we can best ensure safety for the people on the front lines who make aviation fly and for the traveling public in our care.